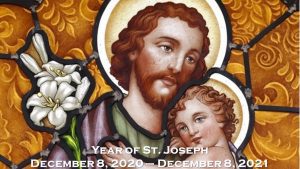 Pope Francis announced a Year of St. Joseph Tuesday in honor of the 150th anniversary of the saint’s proclamation as patron of the universal Church.

The decree said that Pope Francis had established a Year of St. Joseph so that “every member of the faithful, following his example, may strengthen their life of faith daily in the complete fulfillment of God’s will.”

It added that the pope had granted special indulgences to mark the year.

The Dec. 8 decree was issued by the Apostolic Penitentiary, the dicastery of the Roman Curia that oversees indulgences, and signed by the Major Penitentiary, Cardinal Mauro Piacenza, and the Regent, Msgr. Krzysztof Nykiel.

In addition to the decree, Francis issued an apostolic letter Tuesday dedicated to the foster father of Jesus.