The month of September is dedicated to Our Lady of Sorrows. She suffered such anguish when she watched her Son’s passion and death (Luke 2:35). When Our Lord, while dying, gives John the Disciple (symbolically the Church) to His mother, so that we may have her aid.

In the words of St. Therese of Lisieux, “She has given us so many proofs that she cares for us like a mother.”

The Seven Sorrows of Mary are a popular Roman Catholic devotion. In Catholic, the Blessed Virgin Mary is portrayed in a sorrowful and lacrimating affect, with seven daggers piercing her heart, often bleeding. Devotional prayers that consist of meditation began to elaborate on her Seven Sorrows based on the prophecy of Simeon “Yea, a sword shall pierce through thy own soul also….” (Luke 2:35). Common examples of piety under this title are Servite rosary, or the Chaplet of the Seven Sorrows of Our Lady and the Seven Joys of Mary and more recently, “Sorrowful and Immaculate Heart of Mary”.

The feast of Our Lady of Sorrows is liturgically celebrated every 15 of September.

The Feast of Our Lady of Sorrows

The Feast of Our Lady of Sorrows grew in popularity in the 12th century, although under various titles. Some writings would place its roots in the eleventh century, especially among the Benedictine monks. The first altar to the Mater Dolorosa was set up in 1221 at the Cistercian monastery of Schönau.

The formal feast of the Our Lady of Sorrows was originated by a provincial synod of Cologne in 1423. It was designated for the Friday after the third Sunday after Easter and had the title: Commemoratio angustiae et doloris B. Mariae V. Its object was the sorrow of Mary during the Crucifixion and Death of Christ. Before the sixteenth century this feast was limited to the dioceses of North Germany, Scandinavia, and Scotland. 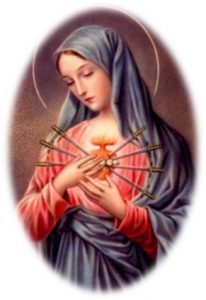 Devotions to Our Lady of Sorrows